The Open Access policies developed and applied by the UK’s major research funders (HEFCE, RCUK and COAF) all aim to achieve one thing: freedom of knowledge for all. However, the specific mechanisms these funders have taken to achieve this goal varies considerably and requires careful implementation from higher education institutions (HEIs).
In this blog post, I’ll describe the different workflows required to meet each funder’s expectations and then look at how these policies intersect with each other to form a tangled web of policy nightmare. Some of the decisions and processes will be peculiar to the University of Cambridge, especially when it comes to decisions around funding for article processing charges (APCs), but the general approach will be true of most UK HEIs. 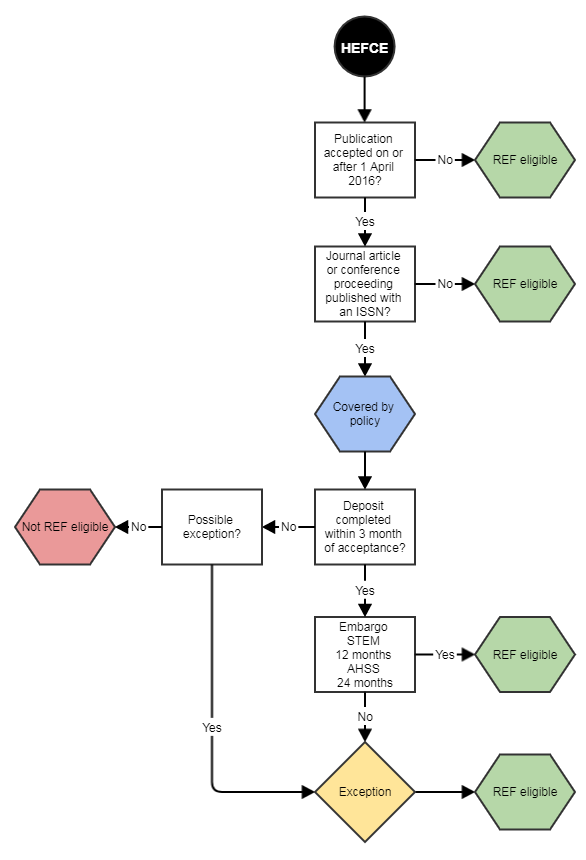 At the outset, let’s be clear: the HEFCE Open Access policy applies to all researchers working at all UK HEIs. If an HEI wants to submit a journal article for consideration in REF 2021 the article must appear in an Open Access repository (although there is a long list of exceptions). Keen observers will note that in the above flowchart HEFCE’s policy is enforced based on deposit within three months of acceptance. This requirement has caused significant consternation amongst researchers and administrators alike; however, during the first two years of the policy (i.e. until 31 March 2018) publications deposited within three months of publication will still be eligible for the REF. At Cambridge, we have been recording manuscript deposits that meet this criterion as exceptions to the policy[1].

Next up, the RCUK Open Access policy. This policy is straightforward to implement, the only complication being payment of APCs, which is contingent on sufficient block grant funding. Otherwise, the choice for authors is usually quite obvious: does the journal have a compliant embargo? No? Then pay for immediate open access.

One extra feature of the RCUK Open Access policy not captured here is the Europe PMC deposit requirement for MRC and BBSRC funded papers. Helpfully, the policy document makes no mention of this requirement; rather, this feature of the policy appears in the accompanying FAQs. I’m not expert, but this seems like the wrong way to write policies.

Finally, we have the COAF policy, possibly the single most complicated OA policy to enforce anywhere in the world. The most challenging part of the COAF policy is the Europe PMC deposit requirement. It is often difficult to know whether a journal will indeed deposit the paper in Europe PMC, and if, for whatever reason, the publisher doesn’t immediately deposit the paper, it can take months of back-and-forth with editors, journal managers and publishing assistants to complete the deposit. This is an extremely burdensome process, though the blame should be laid squarely at the publishers. How hard is it to update a PMC record? Does it really take two months to update the Creative Commons licence?

This leads us to one of the more unusual parts of the COAF policy: publications are considered journals if they are indexed in Medline. That means we will occasionally receive book chapters that need to meet the journal OA policy. Most publishers are unwilling to make such publications OA in line with COAF’s journal requirements so they are usually non-compliant.

What happens if you should be foolish enough to try to combine these policies into one process? Well, as you might expect, you get something very complicated:

This flowchart, despite its length, still doesn’t capture every possible policy outcome and is missing several nuances related to the payment of APCs, but nonetheless, it gives an idea of the enormous complexity that underlies the decision making process behind every article deposited in Apollo and in other repositories across the UK.

[1] Within the University’s CRIS, Symplectic Elements, only one date range is possible so we have chosen to monitor compliance from the acceptance date. Publications deposited within the ‘transitional’ three months from publication window receive an ‘Other’ exception within Elements that contains a short note to this effect.

Sometimes an innocent question can blow up a huge discussion, and this is what happened recently at an RCUK OA Practitioner’s Group meeting when I asked what was appropriate for institutions to do when managing money they receive as refunds from publishers through offsetting arrangements.

When an institution pays for an article processing charge (APC) in a hybrid journal, it is doing so in addition to the existing subscription. This is generally referred to as ‘double dipping’.  I have written extensively about the issues with hybrid in the past, but here, I’d like to discuss the management of offset agreements.

Offset agreements are not equal

While offset agreements are negotiated nationally, there is no obligation for any institution  to sign up to them. Cambridge makes the decision to sign up to an offset agreement or not through a standard calculation. If we are spending RCUK and COAF funds on the offset it must show benefit to the funds first. If the numbers demonstrate that by signing up to (and sometimes investing in) the agreement, the funds will be better off at the end of the year then we sign. The fact this agreement may have a broader benefit to the wider University is a secondary consideration. The OSC has a publisher and agreements webpage listing the agreements Cambridge is signed up to.

In a fit of spectacular inefficiency, all offsets work slightly differently. Here’s a run down of different types:

When Cambridge received its first IoP cheque in 2015 there were questions about what we could or could not do with it. The Open Access Project Board discussed the issue and decided that the money needed to remain within the context of open access. Suggestions included paying our Platinum membership of arXiv.org with it, because this would be supporting open access.

The minutes from the meeting on 31 March 2015 noted: “Any funds returned from publishers as part of deals to offset the cost of article processing charges should be retained for the payment of open access costs, but ring-fenced from the block grants and kept available for emergency uses under the supervision of the Project Board.” We have since twice used this money to pay for fully open access journal APCs when our block grant funds were low.

Whose money is it anyway?

When the issue of offset refunds and what institutions were doing with it was raised at a recent RCUK OA Practitioners Group meeting it became clear that practices vary considerably from institution to institution. One of the points of discussion was whether it would be appropriate to use this money to support subscriptions. The general (strong) sentiment from RCUK was that this would not be within the spirit, and indeed against the principles, of the RCUK policy.

I subsequently sent a request out to a repository discussion list to ask colleagues across the UK what they were doing with this money. To date there have only been a handful of responses.

In one instance with a medium-sized university the IoP money is placed into a small Library fund that is ring-fenced to pay for Open Access in fully Open Access journals only. This fund has the strategic aim to enable a transition to Open Access by supporting new business models and contributing to initiatives such as Knowledge Unlatched, hosting Open Journal Systems, as well as supporting authors to publish in Open Access venues when they have no other source of funding.

A large research institution responded to say they had a specific account set up into which the money was deposited, noting, as did the other respondents, that the financial arrangements of the University would mean that if it were deposited centrally it would never be seen again. This institution noted they were considering using the funds to offset the subscription to IoP in the upcoming year due to a low uptake of the deal.

Another large research institution said the IoP cheques were being ‘saved’ in the subscriptions budget.

In their recent paper “Bringing together the work of subscription and open access specialists: challenges and changes at the University of Sussex” there is a section on how they are managing the offset money. They note: “It seemed a missed opportunity to simply feed it back into the RCUK block grant, but equally inappropriate to use for journal subscriptions or general Library spending”.

Only the start of the conversation

This discussion has raised questions about the decision making process for supporting access to the literature.

Subscriptions are paid for at Cambridge through a fund that is not owned by the Library – the fund consists of contributions from all the Schools plus central funds. Representatives of the Schools, Colleges and library staff sit on the Journal Coordination Scheme committee to decide on subscriptions. However decisions about open access memberships and offsets are made by the Office of Scholarly Communication. Given the increased entanglement of these two routes to access the literature, this situation is one the University is aware needs addressing. The Sussex University paper discusses the processes they went through to merge the two decision making bodies.

This is a rich area for investigation – as we move away from subscription-only spend and into joint decision-making between the subscription team and the Open Access team we need to understand what offsets offer and what they mean for the Library. This discussion is just the beginning.

The Office of Scholarly Communication routinely advises Cambridge authors about their publishing options, and in the vast majority of cases we can help authors comply with funder mandates. However, there are a few notable journals that offer no compliant open access options for Research Council UK (RCUK) and Charity Open Access Fund (COAF) authors. One of those journals is Blood. We’ve previously called them out on their misleading advice:

The author form for the journal Blood is grossly misleading about RCUK/WT compliance. pic.twitter.com/NWSnbHSIEQ

Today we are urging Blood to offer their authors either self-archiving rights without cost and a maximum 6 month embargo or immediate open access under a Creative Commons Attribution (CC BY) licence. If Blood does not offer these options we will advise our researchers that they should publish elsewhere so as to remain compliant with their funders’ open access policies.

You can click through and read the open letter in full below: 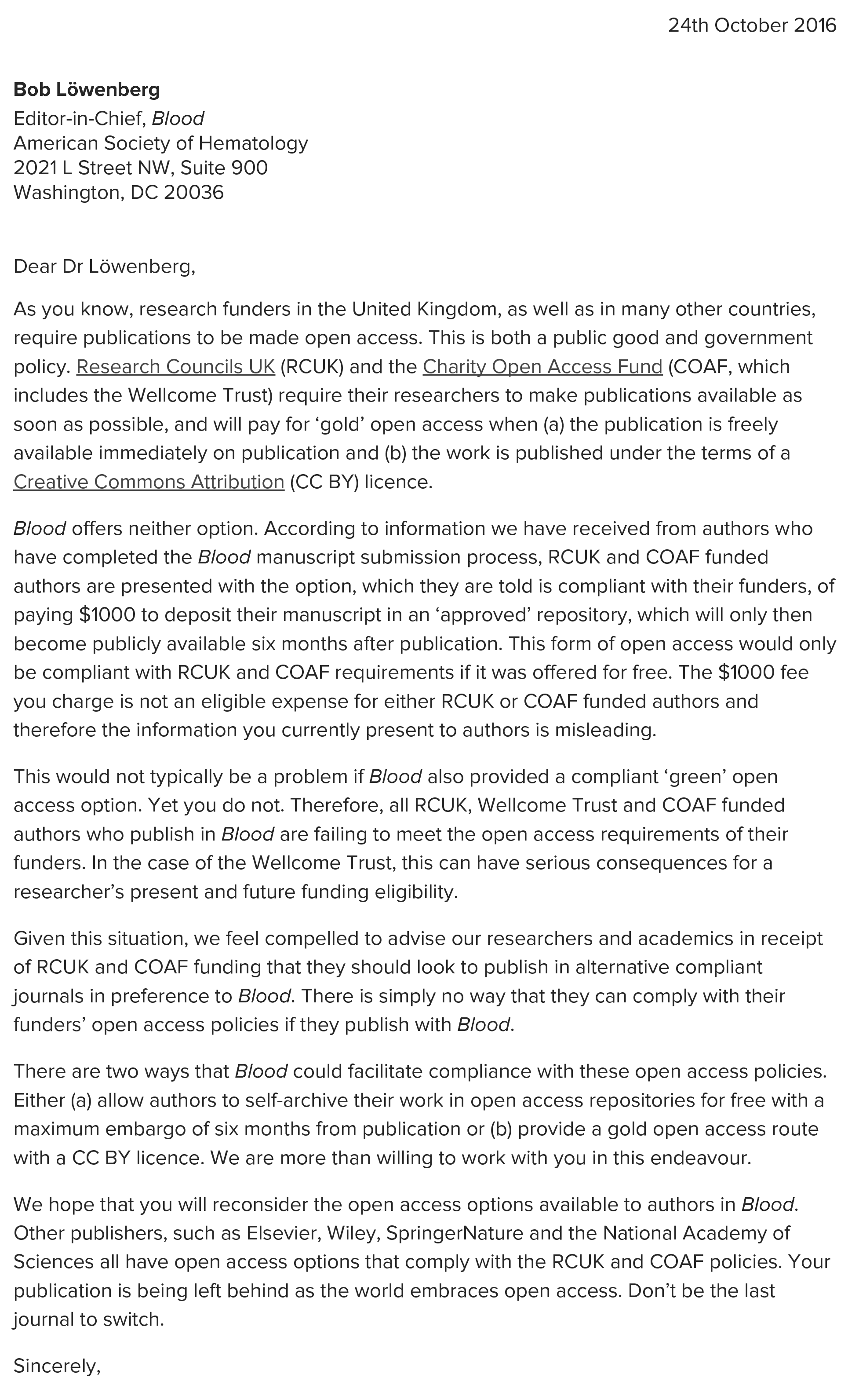