In the last two years, since the REF 2021 open access policy came into force, the Open Access Team has received an ever increasing number of manuscript submissions for archiving in Apollo, Cambridge’s institutional open access repository.

We have been thinking long and hard about ways to cope with the workload, by scrutinising existing practices and streamlining workflows, because we want to provide the best possible service to our researchers, commensurate with the University’s world leading research.

This blog introduces what is perhaps the greatest overhaul of our workflows since the service began: a new ‘Fast Track’ deposit system.

Before the start of the REF OA policy (2014-2016), the Open Access Team would process and manually curate every manuscript submission we received. Authors could expect an initial response within 1-2 working days, after which (usually within a month) we would archive their manuscript in Apollo.

A simplified workflow for a typical manuscript was:

Both the decision (4) and archive (5) steps take time. For each manuscript we would need to decide whether the files we received could be archived, what funder open access policies were at play and the open access options available from the publisher. We could then advise authors about their open access choices.

To archive a manuscript the process was broadly the following:

Each manuscript took on average 18 minutes to archive, which, besides being manually tedious and prone to error, was extremely time-consuming. Add to this the time required to make the initial decision and each manuscript submission could easily take 30 minutes for the Open Access Team to fully process from start to finish, especially if an open access fee had to be paid.

Fast-forward two years and with the rate of new manuscript submissions now peaking at over 1,300 per month, simply processing manuscripts for the REF would require more than four full-time staff members. Whilst these manual processes were viable for a handful of submissions a day, they became unwieldy at scale.

Our first attempt at speeding up our open access system began in August 2017. To start we made a number of operational changes to reduce the time spent processing manuscript submissions:

Unfortunately, the number of steps in the Apollo workflow was still roughly the same as the previous process, but with one key difference: a new field to record what we call the ‘Fast Track’ decision. There were seven Fast Track options:

The first six options represent the vast bulk of all manuscripts received by the Open Access Team, and ‘Other’ option simply acts as a catch-all for anything else. By simply knowing what sort of manuscript has been uploaded much of the decision and archiving process can be automated. However, the agent still needed to retrieve the item from the Apollo workflow, check the version of the file and publication status of the paper, add some metadata fields, approve the item, and move it to an appropriate collection. 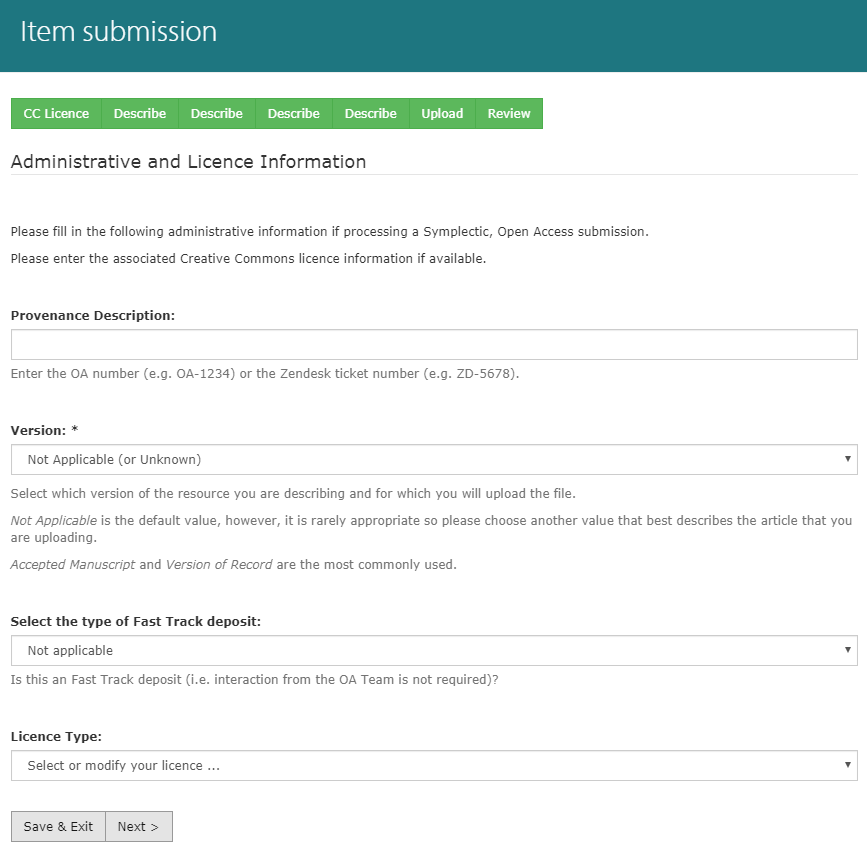 Figure 1. The Apollo workflow page of a typical manuscript submission, with the addition of the new ‘Fast Track’ field.

The choice of Fast Track decision leads to four possible outcomes which would ‘trigger’ actions in our Zendesk helpdesk:

Despite being a much faster process, it was still manually tedious. It could also require up to 33 actions from agents (29 mouse clicks) and 14 web pages to be loaded, still not very user friendly. However, the time to archive had decreased from 18 to 9 minutes – a 50% reduction from the previous fully manual system.

So what if all the steps involved in processing a manuscript submission could be reduced to the absolute minimum, and be actionable within a single webpage? After a short development sprint, the Open Access Team launched the ‘Fast Track Deposits’ interface last September. A snapshot of the user interface is shown below.

Figure 2. The Fast Track interface. Choosing one of the options in blue is enough to fully archive a manuscript, or process it for further action by the submitter or the Open Access Team.

The agent must first inspect the file and check that it is a suitable version (i.e. either the accepted version or the open access published version). If wrongly labelled, they must relabel the file via a dropdown menu, and add/delete files as appropriate. The agent then ‘describes’ the manuscript (i.e. decides whether it is the accepted, published, submitted or proof version) and submits their decision. The decision determines the trigger behaviour in the automatically populated helpdesk ticket. The agent is then free to move on to the next item.

If the decision is ‘accepted’ or ‘published open access’, the item is deposited and the submitter is automatically notified via email. For submitted, proof, and non-OA published versions, the author receives an automatic email asking for the accepted manuscript. Items are archived in the repository under a generic collection, and any forthcoming publication details are added to the record via external source information in Elements.

To see just how efficient Fast Track is we’ve prepared a short demonstration video which captures some of the key features:

Agents therefore need only make one decision: identify the file version. But the real ingenuity of the Fast Track system is that embargoes can be set automatically by:

In some cases, usually because we don’t know the publication date, we can’t determine the embargo length of an accepted manuscript. In such cases we apply a 36 month embargo from the date of the Fast Track decision. We know that this embargo won’t always be correct, however, we routinely check manuscripts in Apollo and update embargoes accordingly.

Figure 3. Simplified overview of the Fast Track process. The key decision is to determine the type of manuscript that has been submitted. Everything else is handled automatically.

Since launching Fast Track the average time to process a manuscript is 1-2 minutes. More than 8,000 items have been processed since launching the phase two Fast-Track interface. If items processed under the phase one effort are included, the number goes up to just over 14,000. And since a picture speaks a thousand words, Figure 4 below shows the effect produced by the new interface launched in September on our backlog of unprocessed submissions. 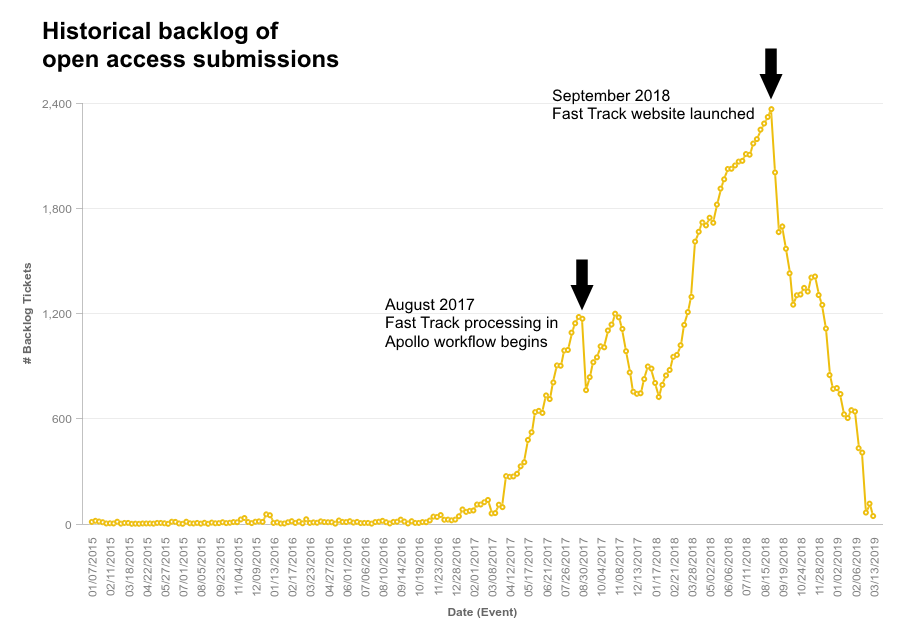 We will continue to develop Fast Track to further streamline our processing of manuscripts. We have already started to partner with librarians and administrators across the University to leverage the collective knowledge about open access which now exists within the University’s professional academic services.

Get in contact: If you are running a DSpace repository and would like to implement Fast Track to work alongside your existing workflows email us at support@repository.cam.ac.uk