Sometimes the best way to find a solution is to just get the different stakeholders talking to each other – and this what happened at a recent Text and Data Mining symposium held in the Engineering Department at Cambridge.

The attendees were primarily postgraduate students and early career researchers, but senior researchers, administrative staff, librarians and publishers were also represented in the audience.

This symposium grew out of a discussion held earlier this year at Cambridge to consider the issue of TDM and what a TDM library service might look like at Cambridge. The general outcome of that meeting of library staff was that people wanted to know more. Librarians at Cambridge have developed a Text and Data Mining libguide to assist.

So this year the OSC has been doing some work around TDM, including running a workshop at Research Libraries UK annual conference in March. This was a discussion about developing a research library position statement on Text and Data Mining in the UK. The slides from that event are available and we published a blog post about the discussion.

We have also had discussions with different groups about this issue including the Future TDM project which has been looking to increase  the amount of TDM happening across Europe. This project is now finishing up. The impression we have around the sector is that ‘everyone wants to know what everyone else is doing’.

With this general level of understanding of TDM as our base point, we structured the day to provide as much information as possible to the attendees. The Twitter hashtag for the event is #osctdm, and the presentations from the event are online. 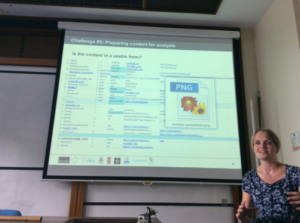 The keynote presentation was by Kiera McNeice, from the FutureTDM Project who have an overview of what TDM is, how it can be achieved and what the barriers are. There is a video of her presentation (note there were some audio issues in the beginning of the recording).

The event broke into two parallel sessions after this. The main room was treated to a presentation about Wikimedia from Cambridge’s Wikimedian in Residence, Charles Matthews. Then Alison O’Mara-Eves discussed Managing the ‘information deluge’: How text mining and machine learning are changing systematic review methods. A video of Alison’s presentation is available.

After lunch, Rosemary Dickin from PLOS talked about Facilitating Test and Data Mining how an open access publisher supports TDM. PhD candidate Callum Court presented ChemDataExtractor: A toolkit for automated extraction of chemical information from the scientific literature. This presentation was filmed.

In the breakout room, a discussion about how librarians support TDM was led by Yvonne Nobis and Georgina Cronin. In addition there was a presentation from John McNaught –  the Deputy Director of the National Centre for Text and Data Mining (NaCTeM), who presented Text mining: The view from NaCTeM .

The day concluded with the group reconvening together for a roundtable (which was filmed) to discuss the broader issue of why there is not more TDM happening in the UK. 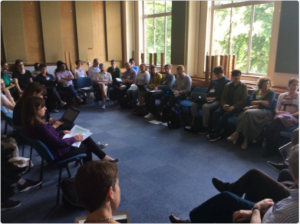 We kicked off by asking each of the people who had presented during the event to describe what they saw as the major barrier for TDM. The answers ranged from the issue of recruiting and training staff to the legal challenges and policies needed at institutional level to support TDM and the failure of institutions and government to show leadership on the issue. We then opened up the floor to the discussion.

A librarian described what happens when a publisher cuts off access, including the process the library has to go through with various areas of the University to reinstate access. (Note this was the reason why the RLUK workshop concluded with the refrain: ‘Don’t cut us off!’). There was some surprise in the group that this process was so convoluted.

However, the suggestion that researchers let the library know that they want to do TDM and the library will organise permissions was rejected by the group, on both the grounds that it is impractical for researchers to do this, and that the effort associated with obtaining permission would take too long.

A representative from Taylor and Francis suggested that researchers contact the publishers directly and let them know. Again this was rejected as ‘totally impractical’ because of the assumption this made about the nature of research. Far from being a linear and planned activity, it is iterative and  to request access for a period of three months and to then have to go back to extend this permission if the work took an unexpected turn would be impractical, particularly across multiple publishers.

One attendee in her blog about the event noted: “The naivety of the publisher, concerning research methodology, in this instance was actually quite staggering and one hopes that this publisher standpoint isn’t repeated across the board.”

Some researchers described the threats they had received from publishers about downloading material. There was anger about the inherent message that the researcher had done something criminal.

There was also some concern raised that TDM will drive price increases as publishers see ‘extra value’ to be extracted from their resources. This sparked off a discussion about how people will experiment if anything is made digitally available.

During the hour long session the conversation moved from high level problems to workflows. How do we actually do this? As is the way with these types of events, it was really only in the last 10 minutes that the real issues emerged.  What was clear was something I have repeatedly observed over the past few years – that the players in this space including librarians, researchers and publishers, have very little idea of how the others work and their needs. I have actually heard people say: ‘If only they understood…’

Perhaps it is time we started having more open conversations?

Two things have come out of this event. The first is that people have very much asked for some hands on sessions. We will have to look at how we will deliver this, as it is likely to be quite discipline specific.

The second is there is clearly a very real need for publishers, researches and librarians to get into a room together to discuss the practicalities of how we move forward in TDM. One of the comments on Twitter was that we need to have legal expertise in the room for this discussion. We will start planning this ‘stakeholder’ event after the summer break.

The items that people identified as the ‘one most important thing’ they learnt was instructive. The answers reflect how unaware people are of the tools and services available, and of how access to information works. Many of the responses listed specific tools or services they had found out about, others commented on the opportunities for TDM.

There were many comments about publishers, both the bad:

Commentary about the event

There has been some online discussion and blog posts on the event:

2 thoughts on “Next steps for Text & Data Mining”